Just looking at this sweet portrait of Jemima + Benjamin that Sasithon Photography of The Wedding Artists Collective shared with us, you know these two have a good story or two to tell. Like how they met at the British Animation Awards—he’s a songwriter and performer and she’s an illustrator—and how a year after their first date in London, she made the move to NYC, and they were engaged within the month (but more on that later). Not to mention, their style is so creative (if you can’t tell!), and each detail from the cheerful hues to the butterflies throughout, also has a story behind it.

Our illustrator bride wasn’t just behind the invites: she also made all of the hand-painted purple and gold silk dupioni butterfly boutonnieres for the guys and headpieces for the ‘maids. Not to mention, she created her own floral headpiece and embroidered bright orange butterflies and cherry blossoms onto her veil, which you’ll get a better peek at below…

Jemima says, I wanted there to be as much colour and natural details as possible, as well as touches of Welsh inspiration since I’m from Wales. About a year before our wedding, Benjamin had bought me a bunch of flowers that I discovered were harboring three little caterpillars. I was going to throw them out but I was curious as to what kind of butterfly or moth they would turn into, so I looked them up and discovered they were Monarch caterpillars. I built makeshift habitats for them and saw them through to the chrysalis and then butterfly stage. The process was complicated (only two of the caterpillars made it to butterfly stage) and I could see how much of a struggle it was. It seemed like a perfect metaphor, since I had been struggling with settling into this new life in New York where everything was different, where I knew nobody and had to start again in terms of work and social life. I took butterflies on as my spirit animal of sorts, so I decided to embroider butterflies onto my wedding veil and to make butterfly corsages and boutonnieres for the bridesmaids and groomsmen.

Their wedding colors were purple (his fave), orange (her fave), and green, to keep everything grounded in nature.

We decided to have a hand-fasting, in order to include elements of ceremony and significance in our non-religious wedding. Hand-fasting is a pre-Christian or Celtic tradition of tying the bride and groom’s hands together. It seemed fitting as we were committing to bringing ourselves together as two very different people—opposites in so many ways—and promising to try to build a new life and family together with the best of each of us. We wrote our own vows; they were very honest and very practical promises to each other where we acknowledged that real love isn’t a Disney romance and can be tough sometimes—we didn’t promise the moon, no ‘forever and ever’s, only that we would work hard through the good times and the bad, be honest, look after each other and look after ourselves too. A lot of people came up to us afterwards and said they’d never heard such realistic and honest vows!

So, with wedding fashion and a ceremony so unique, you could guess that the reception decor would have to be just as whimsical, huh? Don’t worry, it does not disappoint!

Yep, the pops of purple and green here are pretty great.

J was also behind the dip-dyed table runners. Being an almost 2-year engagement, they had plenty of time to get creative, but they made sure to lock down priority vendors like their venue and planner, Brita Olsen Creative, as early as possible.

Sasithon Photography was amazing. As an illustrator (Jemima) and a songwriter and playwright (Benjamin), we tell stories for a living, and we loved the detail that Sas captured in her weddings—her photographs tell a story of the day, and the people involved. She was also absolutely lovely and a dream to have around. She didn’t feel intrusive at all on the day and the images she captured are such special mementoes of a day that passed in a real blur!

And how ’bout a sweet proposal story to wrap things up…?
We were at lunch and I was talking about the retreat from Dunkirk during WW2, Benjamin’s eyes went glassy and I thought I’d bored him into oblivion. He told me that he wasn’t bored, that he loved hearing me tell stories and always wanted to hear me tell them, and would I marry him? He didn’t have a ring and hadn’t planned anything at all, so I didn’t think he was being serious. He assured me he was, we found a jewelry store nearby, we bought the first ring that I tried on (a beautiful antique 1920s deco diamond ring), and took it to nearby Central Park where Benjamin got down on one knee and properly proposed in front of the clock at the Central Park Zoo.

The Wedding Artists Collective is a member of our guide. Click here to see how to become a member. 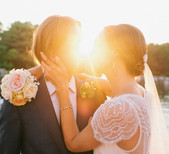