You’ve seen desert weddings and you’ve seen desert festivals, but have you seen a desert wedding festival? That’s what Reena + Shane’s ‘India to Indio’ celebration captured by Rad + In Love was. And YES, it looks as awesome as it sounds. Both first generation Indian Americans, planning a wedding meant incorporating Indian traditions, two religious ceremonies (Sikh + Hindu) with an *intimate* 300 guests, an epic Sangeet and an epic reception… All while staying true to their artistic (they met at a film festival in SF, after all) laidback, personalities.

Reena says, Our wedding was a true expression of our personalities and a mix of cultures. It danced the line that we live everyday as being Western and Eastern. Cakies, if any of you are looking to strike a similar balance—be sure to read her story below. It’s so, so good!

Besides incorporating both of their cultural backgrounds, they had two personal musts—that it be outdoors and that it have killer music. Enter, a Sikh-Hindu wedding with a desert concert under the stars. And while parents are usually super involved in Indian weddings, they were doing something so new that both of theirs agreed to let them take the reigns in creating their own ceremony.

The groom’s baraat (processional) transportation was the LA Rickshaw, which became a rad film booth where guests could create a video ‘guest book’ later on in the night.

Their first ceremony was the Sikh one, which had to be completed before noon. It was a huge hurdle to find an outdoor space that could fit 300 guests, but thankfully they came across the rooftop terrace at Omni Rancho Palmas in Rancho Mirage:

Reena says, For colors, we wanted to do the opposite of the typical Indian wedding with SO many bright colors. And I definitely didn’t want any pink or orange in large quantities. So we went with muted colors that are still found in Indian color palettes that come from natural dying processes. We’re Indian, so of course we had to put gold in the mix.

We recreated the Gudwara (Sikh temple) experience on a rooftop lounge at the Omni Rancho Las Palmas. There were musicians playing. Guests sat on a white carpeted ground with brass tables and colorful pillows. The aisle was an isle of Persian rugs and the stage was surrounded by a short wall of flowers whose colors were Frida Kahlo-inspired. Instead of the traditional red, I wore a blue Sabyasachi couture bridal lengha.

The Laavan are the four prayers that seal the marriage. During the ceremony, Shane was given one end of the palla (scarf) on his shoulder and the other end was held by Reena.

Their Hindu ceremony was authentic and unique as well, but relaxed with a boho desert vibe. It also featured many rituals, ending with the bride and groom walking around the fire seven times. Each time around symbolizes a specific virtue to be fulfilled, like remaining lifelong partners and sharing joys and sorrows.

The Lehenga is made of Khadi (handwoven cotton) with a sequined broad border and matching brocade blouse. SOOO stunning!

Our reception was a concert that took place in the middle of the Coachella Valley desert in Indio. The performers are up and coming artists that have played for audiences across the world. We had farm tables set with gold flatware, beautiful centerpieces, and there were Indian inspired lounges set up on two levels of a desert oasis right on top of the San Andreas fault.

Originally the reception location was where the Cahuilla Indians settled and lived because there is water underneath the ground which made the spot an oasis in the desert where palm trees + vegetation can grow. So it was on sacred grounds. You also had to take a jeep ride to get to the spot, so it really added to the magic. It took you out of your usual comfort zone and made you be fully present in the space. Sunset from the location was beautiful and after the sun set, you were under the vast starry, night sky. It was a difficult location because there was no potable water and the electricity was run by a generator. However, we were determined to realize our vision there. (We couldn’t have pulled it off without Jennie of True North Event Co and the staff at Metate Ranch.

Like the florals, Reena’s second look was inspired by Frida Kahlo. If you couldn’t tell. Um, YES.

The bride’s tips for those planning:
• Hire a planner, or if you can’t, enlist someone to coordinate day-of so you can enjoy the day
• If it’s a destination, consider the time + cost of travel back and forth when planning
• The best way to keep costs down is to have less people—which can mean tough conversations
• If you’re merging different cultural or religious backgrounds, have conversations upfront about both sides’ musts

BIG thanks to our bride for sharing all that went into their India to Indio wedding. Congrats, guys!

Rad + In Love is a member of our guide. Click here to see how to become a member. 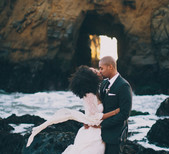