Sometimes weddings are better served up with a little 1920’s pizzazz – especially when they’re executed to a T, like the one you’ll see today. Funny enough, Melissa + James had no idea their wedding would take guests back to the 20’s, until Melissa chose her dress. The feathers, the layers of fabric flapping against each other; they all pointed to one idea: ask guests to come in their 1920’s rural Sunday Best! And, that they did. Guests drank plenty, ate well, knocked out a few games of croquet, and didn’t leave without admitting it was a wedding they wouldn’t soon forget.

The headpiece Melissa wore was designed by both her and her mother to match with the ostrich feathers in Melissa’s dress, and was later created by Sara Gabriel. The gentlemen-like accessories James wore had a great deal of history attached to them. The hat came from his great grandfather, and handsome pocket watch was Melissa’s great grandfather’s.

The Pastures of Plenty Farm gave them the opportunity to keep everything as local as possible. The food, and almost all of the flowers, came straight from the farm, making this a true farm to table celebration.

Don’t you think they nailed the 1920’s rural theme look they were going for?

Melissa’s mom got a wood burner from Hobby Lobby and carved the signs that read “Mel’s Speakeasy”, “Outhouses”, and “Step Back > 1920s” on old fence posts bought at the flea market.

Photos from both Melissa and James’ families that had been taken in the 1920s were displayed on a table that was adorned with a quilt made by Melissa’s great grandmother and her sewing club that had originally been given to her paternal grandmother. To add on top of the eye candy, Melissa’s mother made the seating chart – an old map with 10 different WPA postcards of National Parks that Melissa and James had been to (Yellowstone, Great Smokies, Tetons, and more).

* Happy Confetti Photography * is a member of our guide. Click here to see how to become a member. 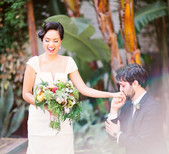 i just love the tender, old fashioned feel of this wedding. it's just lovely.

I love how the couple went all out for this theme - the outfits, the accessories, the special touches. And captured beautifully.

Simple sometimes is best. This wedding has all the classical touches of the 1920’s especially the glass bottle center pieces.

It is very nice as well as unique if the concept of the wedding ceremony would be like this. I love the bride's dress it was just simply yet very elegant.

Congrates both of you. The way of your thinking is very original. These articles would be the masterpieces specially the pics.

the theme is so beautiful! It captures them so well!

Now that you know the number one secret, taking action, you are one giant step ahead of so many other online business owners. The internet has a dozen and more of opportunities to make money working at home. You can also make your own DVD collection by downloading the movie in your PC and then burning them into a DVD.

This is a refreshing wedding with so many creative ideas like the croquet. I also love when family heirlooms are part of the details, too!