It’s been way too long since we’ve had a bachelorette party post here on 100LC, don’t you think? Luckily this bachelorette weekend in Chicago that the bride Chrissy’s sister Katie of Kate & Company dreamt up with Wrap It Up Parties totally makes up for it. Thanks to Jennifer Lawrence Photography for sharing the photos!

Katie says, When discussing Chrissy’s Bachelorette Party she only had two requirements (1) that it’s not traditional and (2) that it include her closest group of friends. She left the rest up to me! We selected Chicago, because it was centrally located for all the Bride’s Babes. I had a pretty clear idea of what I wanted to do—an ethereal and chic bohemian two day party that included yoga, a rooftop, a spa, and at least one night out on the town. As luck would have it #queenbey ended up in town the same weekend we had planned the bachelorette party, giving us a clear direction for Saturday’s plans! We danced, adorned in sparkles, and celebrated our bride-to-be! I couldn’t have asked for a better weekend!

Chrissy is a clothing designer with amazing style so everyone wanted the weekend’s events had to reflect that. Mission accomplished!

Did we mention that the weekend was called Babe Fest? So fun. they had this sweet cocktail tasting too.

See more bachelorette party ideas in our gallery below:

Chrissy says, My bachelorette weekend was filled with so much love, surprise and excitement. My sister wrapped all my favorites—people, food, tunes—into one perfect weekend. The highlight had to be wearing an oversized floral crown + beaded dress while losing my mind to Formation at the Beyonce concert.

Cheree Berry Paper is a member of our guide. Click here to see how to become a member. 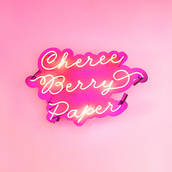