By time Marie + Cole eloped in Joshua Tree with Lovisa Photo behind the lens, they had been dating for 6 years, two of which were long distance while working at different art-related jobs in New York + St. Louis. They originally planned to get married in St. Louis, but after all that time, they couldn’t wait to be husband + wife. Not super concerned with following tradition, they went for it!

Marie explains, Cole located the beautiful Airbnb and we invited four close friends for a lovely small ceremony in the backyard of the house. He planned the elopement trip and I planned a reception in St. Louis that August, so all the elopement decisions including Lovisa Photo, location, etc, are thanks to Cole! He did an amazing job! My favorite memory was when I unexpectedly had some tears during the ceremony and Cole was there to catch them with his always trusty hanky.

One of Cole’s dreams has always been to live in a mid-century modern home in the desert, so it became their muse for the elopement. The Rolling Stones’ Gimme Shelter played from the vintage record player in the house while they exchanged vows.

Cole says, After the location was set I went about the internet looking for an officiant. When I found The Vow Keeper I knew she would be the perfect person to perform the ceremony. Her services are inclusive and diverse and she really helped us customize the ceremony for our values.

Then Erin of Lovisa Photo helped them base the day’s events around the photos so they could capture the best light, which you can see more of in our gallery!

Anna Sheffield is a member of our guide. Click here to see how to become a member. 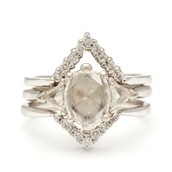