Okay. So. You might have heard how much we love paper flowers around here. We’ve posted lots of inspiration and many a tutorial on them in the past (such as paper dahlias, paper flower luminaries, and watercolor paper flowers, to name a few). So you can imagine how excited we were when we caught sight of creative director (and DIY queen) Amy + and her guy Matt’s wedding, which was all decked out with these paper beauties. Lots more by Isabelle Selby Photography + a video in the post!

Then there’s this killer color palette, which was not so much a palette but black and white with pops of bright shades throughout. No surprise that Amy designed the invites and other paper products too! (If you’re into her work, stay tuned for her stationery line.)

Amy’s story: I have been to lots of weddings. In fact, I have been Maid of Honor five times and getting that type of perspective helped me know what mattered to me when it was time to plan my wedding. Matt and I didn’t want a theme or anything too structured. Most importantly we wanted it to feel like us, like there was no way anybody else could have thrown this wedding… We pride ourselves on our senses of humor and fun-loving attitudes so it was important that the wedding didn’t take itself too seriously. One thread running throughout was the phrase holy crap! It appeared on the save the dates (which I designed), the beer bottle opener key chain favors, in 3D type on the welcoming table and on a banner Matt’s nephew carried down the aisle.

Btw, all their vendors were Brooklyn based, starting with their venue, Greenpoint Loft (!!!).

I made all of the bouquets + boutonnieres from crepe paper in pinks, corals, and reds. Not only did it save us a ton of money it also looked amazing! Each bouquet was a single oversized bloom rather than a traditional style and the overall effect was colorful, graphic, and striking. In addition to designing the save the dates I also created the entire invitation suite, and the programs which were playful and fun. I also created the table signs which were named for inside jokes and bits of our shared history rather than just numbers. So instead of being seated at table #7 guests were seated at tables named Grassroots Tavern (the location of our first date) or Chicago Mix (a type of popcorn that’s our favorite snack food).

‘Maids in black, SUCH a good decision, right?

Perfect segue into these words from their officiant + close friend… I see something in them and in their union worth celebrating—an unapologetic devotion to what matters to them, to what makes them happy, to the people they love and who love them, to life’s pleasures and flavors, ingredients for a great and lasting partnership. Today we have not cake but pie. Not a preacher but a dear friend. Not a classical wedding march but the Beach Boys. Not fussy food but barbecue. These things mean something to them. And they can mean something to rest of us. Let’s unite these two, celebrate them, and then let’s eat.

Isabelle Selby Photography is a member of our guide. Click here to see how to become a member. 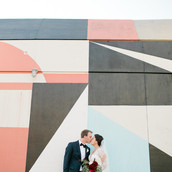 Thank you so much for sharing this awesome wedding. Amy is beyond creative as you can tell and it was so much fun to see these two together. Congrats again Amy and Matt!

Those are the prettiest paper flowers I've ever seen! Kari www.sweetteasweetie.com

What stunning paper goods, love the order of service. And I think i'm going to have to learn how to make paper flowers myself! Oz www.therichgypsy.me